For centuries tarot cards have been the focus of speculation as to their origin, significance and meanings. From originally utilizing the tarot cards as mere fortunetelling and playing cards, they have evolved to what is regarded today as mystical purveyors of wisdom and insight. Tarot cards can be used simply for one-card readings or explored further with multiple layouts. In spite of his experience as a rigorous scientist, noted psychologist Carl Jung understood the

tarot’s symbolism to be a way of defining universal consciousness and as archetypes of the soul. Noted for his brilliant exposition of the theory of “synchronicity” as expounded in his introduction to the I Ching, Jung somehow catapulted the cards from the superstitions of the past into the recognition of them as reflective, sensitive and occult devices. He attempted to explain how the tarot cards through a mere shuffling could manage to portray any situation with such simplicity and accuracy while reflecting and integrating the various symbologies and philosophies of Roscruicianism, Egyptian arcane wisdom, Kabbalah, Christianity and other forms of hermetic philosophy. If you want to learn more about the relationship between Jung and the Tarot, read Rose Gwain’s Discovering Your Self Through the Tarot as she explains how Jung’s personality types combine with the guiding principles of the Tarot.

Around the end of the 20th century, there emerged the Order of the Golden Dawn, an occult and hermetic philosophy group with such notables as Aleister Crowley, the poet William Butler Yeats and teacher Israel Regardie. Amongst that eminent group was an artist by the name of Pamela Coleman Smith who with A.E.Waite created the Rider-Waite Tarot Deck, restoring much of the occult symbolism and elevating the deck to its true occult significance. Now considered one of the most popular if not the most popular deck, the Waite tarot deck is known for its simplicity and ability to capture images that reflect all psychological, emotional or spiritual states. It is

considered to be the first deck for an aspirant. 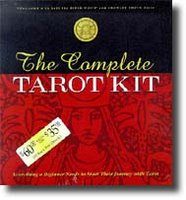 The Complete Tarot Kit combines the Rider-Waite with the Aleister Crowley decks. The Crowley deck is known for its brilliant, powerful imagery and artistic renderings and reputed to be a “deck of power.” The fact that Crowley lived a kind of questionable life only adds to the mystery of the cards.

Finally, the Osho Zen Tarot Cards highly recommended for its transformational quality. One is amazed at the beauty, humor and brilliance captured in the drawings of the illustrator, Ma Deva Padma. The pictures are accompanied by two explications: one very deep and esoteric from the Zen writings of the great guru Osho, who has since departed his body, and one from Ma Deva Padma imparting a contemporary relevance to any situation.

Any of these tarot decks can provide a clear and functional explanation of any situation, provided you have the openness and desire to hear the truth and clarity that abounds within these magical decks.