By The Spiritual Explorer | Published 15 September, 2009

The philosophy of reincarnation is not just a New Age Philosophy. In fact, in ancient times, among the Jews, there were sects, namely the Essenes, who believed in the science of reincarnation. Although it seems strange that we call it a “science,” there are some who believe that reincarnation can be proved through noticing in certain individuals certain traits that have occurred. In fact, the Buddhist philosophy, namely the lineage of the Dalai Lama, speaks of Lamas and Tulkus who are reborn and carry certain traits that enable the wise seers who seek them in successive incarnations, to recognize them as the true teachers of their lineage.

Reincarnation literally means to be made flesh again. So it is about somebody surviving death to be reborn in a new body while retaining certain characteristics of the past incarnation. Although a new personality might be developed in each life in the physical world, some part of the self is said to remain constant through reincarnation in successive lives.

The doctrine of reincarnation is a central dogma within the majority of Indian religious traditions, most spectacularly Hinduism. In the New Age movement, there is a strong belief amongst the followers of reincarnation. Some have said that this was the main reason the New Age Movement is so popular, because it lends and offers hope to those who feel dispossessed from ordinary religion. The Buddhists concept of reincarnation actually diverges from the Hindu-based traditions in that there is no unchanging soul or eternal self to reincarnate.

Elizabeth Clare Prophet is a New Age phenomenon and while she has been known to set forth some controversial theories, in Reincarnation: The Missing Link in Christianity, she speaks of how Christianity as it evolved missed its moment when it refused to avow reincarnation. In fact, her claim is that, according to evidence from Dead Sea Scrolls and Gnostic texts, Christ truly believed that the soul reincarnated again. In fact, she felt that resurrection was one of the proofs of this claim. While fundamentalists would argue that Christ was the “true” way and the light, she felt that Christ as a true mystic truly taught that the way to know God was to unite with the God within. Her concept of reincarnation is thought provoking at the very least and at the most, provides a modicum of credibility through her historical research.

Karma can be very closely linked to reincarnation. The belief that a person through his or her actions can create a possible effect through not only their lifetime but in lifetimes thereafter has caught hold. Nowadays people speak of reincarnation and karma almost as if they were accepted doctrines. This belief of reincarnation has truly proliferated in our time. 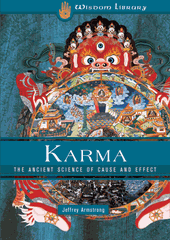 If one were to speak of a great influence in these times by a spiritual leader one would have to place at the top the name of Paramahansa Yogananda. His Autobiography of a Yogi has to be one of the top best selling spiritual books of this century. It is one of the first books anyone first traveling the spiritual path will choose.

What comes through that book and this book is Yogananda’s deep encouragement to all spiritual seekers, giving us reassurance of the existence and love of God as we live this life now and hereafter. In his book Karma and Reincarnation, Yogananda with his wit and confidence, answers with authority those questions of why there is suffering in the world; is there a life after death;is there reincarnation; and is there heaven, amongst many other subjects. As he speaks of the truths of karma, death and reincarnation, Yogananda also speaks of the deeper purpose of each soul and he exhorts all of us, with unbelievable compassion and guidance, to bring these truths into our lives and utilize them towards bringing our souls in closer alignment with God. Again, he is one of our most revered teachers of the 20th century and when he speaks of reincarnation, we are hard pressed not to believe him.