By The Spiritual Explorer

Any dog or horse trainer will tell you that what is fed to animal influences its behavior. Although we like to forget this when it comes to ourselves, what we eat has a huge influence not only over our physical well being, but also over our thoughts, and ultimately our emotional and spiritual well being. The yogis of ancient times knew this, and many classical yogic texts, contain advice on a yogic diet. However, proper diet is a controversial subject. Nutrition has been extensively researched by modern science, and there seems to be as many ‘proper’ diets as there are scientific studies. It is more than a bit confusing for someone to devise their own individual diet amidst the different personalities that contribute to these books. The challenge is to figure out what suits an individual’s particular constitution and circumstances.

Ayurveda, the classic system of Indian medicine, best answers those requirements. It classifies people, as well as food into three categories according to their nature. These three ayurvedic categories, or doshas as they are called, are Pitta (hot and oily), Vata (dry and light) and Kapha (cold and moist) and in ayurveda, the individual’s diet should be tailored to the individual’s constitution to keep the particular dosha in balance. Some foods which are recommended for a particular ayurvedic constitution may not be suitable for another; For example, while milk, a sattvic food, is generally good for a Pitta constitution, in ayurveda, it may not suit someone with a Kapha constitution unless it has some herbs or spices in it to ameliorate the situation. The ideal ayurvedic diet also changes depending on the time of the year. Similar to macrobiotics, ayurveda honors the seasons and recognizes that different vibrations, densities and the atmosphere affect the being according to any particular season. In winter one might imagine eating food that is more warming; in summer and spring, we would of course lighten up and eat lighter more sattvic food. Of course, the differences again would be the ayurvedic dosha with which you are dealing. 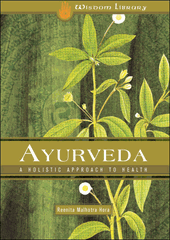 Ayurveda attempts to bring the organism back into its original balance. It is difficult to remember that unless one has had a very balanced lifetime; food, relationship and resident choices are sometimes arbitrary and are not at all in keeping with one’s constitution. Just as in homeopathy, one seeks to restore the original constitution, so too does ayurveda through food, exercise, adherence to certain spiritual practices, seek to do the same. For example, in ayurveda, if one is a Vata type, it is not recommended to do aerobics, for the simple reason that wind and bursts of energy deleteriously affect the Vata disposition. Pittas, known for their high energy, given to playing tennis and other competitive sports which they thrive on, might be encouraged not to play tennis under a noonday sun since that would aggravate their condition Kapha types, while in their ideal state of good stamina and resilience, but in their detrimental state of sluggishness and inertia, would probably be encouraged to choose gentle walking or bicycling, so as to move their solidity. So we see that in ayurveda one treats the individual very individually. Contrary to western medicine, which seeks to give one pill to fit everybody, ayurveda is designed with you in mind.

In ayurveda, it is not just by food alone do we become balanced however. That is the extraordinary thing about ayurvedic medicine. A doctor of ayurveda would not merely look at your diet or symptoms and then prescribe a drug or herb that fits all. Ayurvedic medicine looks at the person or patient in his or her totality. The questions of what are your dosha, your lifestyle, your food consumption and your spiritual practice are some of the components of healing in ayurveda. What brings balance to the person is not just by treating their constitutional ailments, but also by bringing serenity and harmony to their total selves. That has been called the “mean” of ayurveda.

This is done by various means. Ayurveda looks at when you eat, how you eat, and what you eat. It is that old maxim that we are what we eat. If you were predominantly Vata, in ayurveda, this would indicate that you are a pretty sensitive soul, particularly susceptible to the influences of heat, light, wind, etc. Many things can upset you. In fact, I knew a person who had a fan in her room that became aggravating. It is said in ayurveda that if a person is ill or out of balance, the first thing to look for is the Vata dosha. One must bring the Vata dosha back into balance in ayurveda.

How does one do that? Since Vata is usually a nervous condition, one strives to bring balance and harmony, and basically, to soothe the person’s nature. In ayurveda, this means providing food that is comforting and warm. For example, for breakfast, a nice breakfast of a warm cereal would be beneficial. Lunch and dinner would again perhaps be some nice warm and comforting soups. Spicy food should be avoided because that would be heating and exciting. Then one would look at the patient’s relationships, lifestyle and spiritual practice. In ayurveda, these are the best medicine for the patient.

For this and other information on Ayurveda, visit Ma’s India Spiritual Gift Store.