By The Spiritual Explorer | Published 2 December, 2009

Who is this wonderful, fierce, Nubian black goddess who both inspires and instills fear into the human heart? The answer of course is the great goddess Kali. The next question is, from where does this fear of Kali arise. The fact that Kali is black, wears a string of heads around her neck, sticks out an enormous, bright red tongue, evinces a terrible gleam in her eyes, and lastly,  stands with her foot upon a compliant Shiva, would of course contribute to the traditional thoughts of Kali with foot on Shiva as being non-benevolent and fearsome.

Fear might also arise from her portrayal as Smashan Kali in the “cremation grounds” surrounded by dead bodies. In this rare representation, Kali’s left foot is always on Shiva. Of course, to the true devotee, Kali’s portrayal in these funerary grounds, symbolizes her presence in the heart of devotees who have killed their earthly desires and want supreme consciousness. She is also known as the “Adi Shakti,” fundamental power, or “Para Prakriti,” beyond nature.

When asked by some to show Kali’s true nature, Kali has complied and to the true devotee, has shown herself to be golden in color and radiantly beautiful. In fact, the great guru Ma Jaya has recounted this story Kali’s transformation herself in her many darshans and writings. Ma Jaya who is an extraordinary guru and devotee of Kali, speaks of and praises Kali for the true sacrifical goddess/warrior that Kali is, who works tirelessly on behalf of her devotees. Listen to Ma’s teachings on Kali on the CDs of her intensive Awakening the Ancient Feminine Warrior. 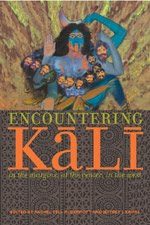 Many books have posed questions regarding the understanding of Kali as she relates to cross-cultural interpretation. Unfortunately, Hollywood has sometimes characterized Kali as a frightening and fearful goddess. For those devotees who have known well the power and compassion that Kali conveys, she is not the feared goddess, but the one to whom humble devotees pray to slay and abate their worst fears. In actuality, there has been a turnaround of thought regarding Kali in contemporary religious belief in that she is now considered to be a “benevolent” goddess. Some might even surmise that since the advent of television, showing frightful images of the world and war, that perhaps the great goddess Kali does not instill the same fear in people. She seems almost benign considering the horrific images with which people are now confronted. The many interpretations of Kali in regard to cross-cultural beliefs have been thoroughly discussed and examined by many authors. Encountering Kali In the Margins, At the Center, in the West by McDermott and Kripal will give you a full picture of the goddess. 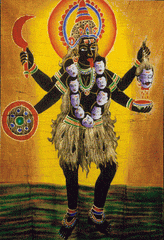 Tantric beliefs extend Kali’s role so far as to be considered the “ultimate reality” or Brahman. Now this might suprirse those who think of Brahma, the ultimate creator, as male. Of course, in the pantheon of Hindu spirituality, the sex of the gods and goddesses might well be considered as being androygymous, for they are not limited by contemporary thought as to what consittutes male and female attributes. The Hindu pantheon with male and female deities stand equal with each other as to power and invincibility. In fact, Kali, is a warrior goddess, capable of intense destruction, similar to that of the male god Rudra. Any one of the goddesses such as Kali are also capable of destuction of anything that stands in the way of the progression or well-being of their devotees. As seen in the colorful Kali Batik on the left, she  is also considered foremost amongst the Mahavidyas, those ten awe-ful Tantric goddesses.

Today, again in contemporary thought, Kali is also known as the goddess of time and change. It is felt that when Kali comes into your life, you are instantly thrust into the moment. To be in the moment is to stand outside of time. If one is brave enough to stand before the spiritual assault of Kali and allow the ego to be slain, one allows oneself to be stripped of the past and thrust into the moment. In that moment of Kali, one achieves one’s true power. This is the liberation for which all devotees long.
To the Spiritual Aspirant, may Kali grant your true desires for liberation. Om Namah Kali! Ki Jai!

This entry was posted in Uncategorized and tagged Kali, Smashan Kali. Bookmark the permalink. Follow any comments here with the RSS feed for this post. Post a comment or leave a trackback: Trackback URL.