Most people consider chakras to be a fanciful description of energetic functions of the body. However, in the East they have long been considered to influence and even govern bodily functions. Chakras are energy centres along the spine located at major branchings of the human nervous system, beginning at the base of the spinal column and moving upward to the top of the skull.

Massage therapists and Reiki practitioners will readily attest to feeling energy emanations from the various points or chakras along the body. And in fact, if one were to allow a willing suspension of disbelief and allow oneself to feel this chakra energy, one could probably subscribe to that belief rapidly also.

We have all heard about certain chakras being open and closed, and in fact, acknowledge the times when we have felt our hearts closed to somebody because of some particular event in our lives or felt our energy diminishing at certain centers within our bodies. We all know of people who have complained their third chakras were never open and therefore they claim to not have ambition or self-esteem as a result. We have also heard of people claiming that those who don’t appear to be in touch with spiritual aspects probably don’t have their sixth or seventh chakras open. Many healers have also attested to the fact that certain illnesses arise because of lack of energy in a particular chakra and have found that when this energy is restored, there is a resurgence of healing in that particular area.

While we at Mas’ India make no personal claims of the reports of healing via the chakra necklaces we carry, we have long heard from buyers of these various necklaces that when they focus on a particular chakra, sensing the lack of energy within a particular chakra, that the wearing of such jewelry has proved beneficial to them, Based on this anecdotal evidence, we offer the following chakra pendants, all in stunning sterling silver: 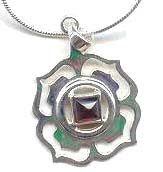 Root Chakra Pendant with garnet stone, when you feel as if you have lost connection with the energy rooting you to the earth. Lack of this earthly connection has sometimes been associated with back pain. 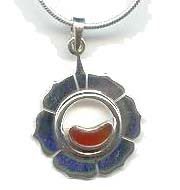 The Sacral Chakra Pendant made with carnelian, for possible malaise in the pelivc area usually accompanied by a dimishment of libido and loss of creativity. 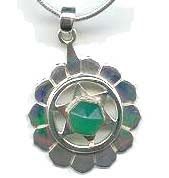 Heart Chakra Pendant with green onyx stone, for those who perhaps have given so much emotionally that they now feel emptied and exhausted from their labors. 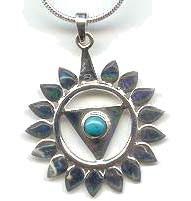 Throat Chakra Pendant with turquoise, for those who feel unable to speak their truth and lack confdence in their assertions.

Third Eye Chakra Pendant with lapis lazuli, one of the most spiritual of stones, is sure to assist anyone in opening and revitalizing the third eye, thus promoting awareness and clarity. 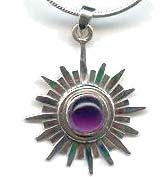 Crown Chakra Pendant with amethyst, reputed to be one of the most healing stones, for those people who have temporarily lost touch with their faith and feel a lack of connection to humanitarian ideals.

All of these chakra pendants with black string are also available as designs in pewter alloy.

For those of y

Whatever chakra stone you choose, may it be your good fortune to receive healing from them! Om Namah.