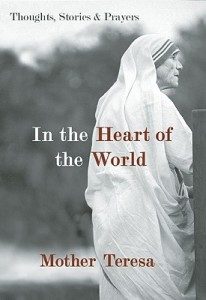 Heart of the World by Mother Theresa

When asked to review In the Heart of the World, a book written by Mother Theresa, this Spiritual Explorer admits to a formerly biased view of Mother Theresa, really borne out of ignorance of the extent of work Mother Theresa had done and those she had influenced. I had heard Mother Theresa was angry, full of contradictions seemingly unknown to a supposed saint and had undergone at many times in her life her own “dark night of the soul,” where she doubted God’s or Christ’s existence in her own life. Although Mother Theresa had been praised by many individuals, governments and organizations, Mother Theresa also encountered much criticism from various individuals and groups, critical of her stance against contraception and abortion, a belief in the spiritual goodness of poverty and alleged baptisms of the dying.

Noted atheist and author Christopher Hichens was critical in feeling that while Mother Theresa administered to the needy and proselytized the poor, she never really attacked the idea of poverty. This concept of attacking poverty has found popularity in recent years where many organizations have begun to enable and encourage people to earn their own living and reduce poverty not merely through donations to the needy, but to promote an objective of empowerment. 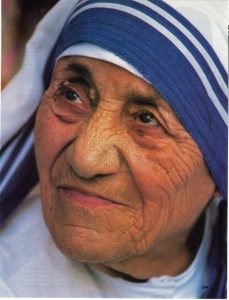 Born in 1910, Mother Theresa left her home for convent life at the age of 18 as a missionary and took her vows in 1937 while also serving as a teacher.On 10 September 1946, Mother Teresa experienced what she later described as “the call within the call” while traveling to a convent for her annual retreat. “I was to leave the convent and help the poor while living among them. It was an order. To fail would have been to break the faith.” Beginning her work with the poor in 1948, Mother Theresa replaced her traditional nun’s habit with a simple white sari decorated with a blue border, adopted Indian citizenship and began her work in the slums where Mother Theresa responded to the needs of the destitute and starving. Mother Theresa’s mission, in her own words, was to care for, “the hungry, the naked, the homeless, the crippled, the blind, the lepers, all those people who feel unwanted, unloved, uncared for throughout society, people that have become a burden to the society and are shunned by everyone.” Starting with 13 members in Calcutta, today there are more than 4,000 nuns running orphanages, AIDS hospices and charity centers worldwide, and caring for refugees, the blind, disabled, aged, alcoholics, poor and homeless and victims of flood and famine. At the time of Mother Theresa’s death in 1997, she had over 610 missions helping people.

Notwithstanding this amazing and complex biography, I am favorably struck by In The Heart of the World by Mother Theresa, apparently written two years before her death where Mother Theresa seems to have reclaimed her faith in Jesus and God. A scant 100 pages, In the Heart of the World, is one of those simple, beautifully written books that one wishes to always carry around with them to remind them of simplicity and humility in carrying out their service work. The word charity, coming from the word “caras” means love and that is what Mother Theresa’s main message contains. Mother Theresa speaks of how it all came down to people essentially needing love, and that we are all capable of that form of ministry, whether it be in the form of a smile or handshake or attendance to any small matter.

Whatever criticism has been leveled at Mother Theresa, none can deny her commitment to her spiritual ideals and the covenant she made one day with her God. Nor can we deny how Mother Theresa woke up and energized a sleeping world to the suffering of the indigent and reminded them of the gift of service. I highly recommend this book for inspiration and simplicity.

“The poor we seek may live near us or far away. They can be spiritually or materially poor. They may be hungry for bread or friendship. They may need clothing or the sense of wealth that God’s love for them represents. They may need the shelter of a house or the shelter of having a place in our hearts.” (Mother Theresa)