By The Spiritual Explorer | Published 24 November, 2010

Dear Spiritual Explorer:  Do you have anything in your store that refers to Swami Chidvilasananda? Jane P., New York, NY 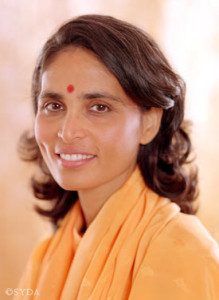 Dear Jane: We have a wonderful CD that Gurmayi  Chidvilasananda recorded called Govinda Jaya Jaya where Swami Chidvilasananda chants with great joy, tenderness and devotion to God.  The divine names in this chant are all descriptions of Lord Krishna. Did you know that Govinda means “the one who finds or gathers the cows,” and Gopala means “the one who protects the cows?”

Both were names used for Lord Krishna when he was a young herdsman in Brindavan. Jaya means “hail to,” and this chant hails the one who finds and protects us from inner and outer obstacles on the path to God. And finally, Gurumayi Chidvilasananda chants to Radharamana who is Krishna in the form of Ramana, the beloved consort of Radha, a Gopi, whose devotion to the Lore was pure and undeterred. Hari is the aspect of the Lord which releases us from our sorrows and leads us towards reunion with God. Thus with one simple chant, Swami Chidvilasananda brings us unutterable joy and purpose to our devotion.

Swami Chidvilasananda, or Gurumayi, as she is called now by her chelas, is what is known as a Siddha Guru who walks the path of yoga under the guidance of her Guru Swami Muktananda.  Gurumayi received her power and authority of the Siddha Yoga lineage from Swami Muktananda before he left his body in 1982. Their message is that the experience of divine consciousness is attainable in our human bodies. Swami Chidvilasananda often directs us back inside ourselves where she states that this attainment is possible and accessible. Like Baba Muktananda, she bestows shaktipat, which is a form of divine consciousness transmitted through the power of the Guru.

Swami Chidvilasananda is a very popular guru and has many chelas. Thanks for writing, Spiritual Explorer

This entry was posted in Uncategorized and tagged Chidvilasananda, Muktananda, Spiritual Teacher. Bookmark the permalink. Follow any comments here with the RSS feed for this post. Post a comment or leave a trackback: Trackback URL.