Dear Spiritual Explorer: Have you ever heard of Baron Baptiste? I hear that he has a style of yoga called Vinyasa yoga. Could you talk about that? Robin C., Reno, NV

Dear Robin: Vinyasa is a term that covers a broad range of yoga classes. The word Vinyasa means “breath-synchronized movement.” In other words, the teacher will instruct you to move from one pose to the next on an inhale or an exhale. This technique is sometimes also called Vinyasa Flow, or just Flow because of the smooth way that the poses run together and become like a dance. 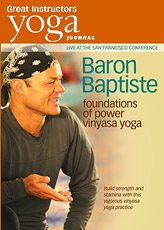 Baron Baptiste’s name has become synonymous with Vinyasa yoga and his DVD, Foundations of Power Vinyasa Yoga, can create a positive shift in your life. Filmed live at the fifth annual Yoga Journal San Francisco Conference, this unrehearsed 90 minute program of Vinyasa yoga captures the style and beauty of Baron Baptiste. Baron Baptiste popularized the style of Vinyasa yoga which is designed to create heat in the body and stimulate energy flow. He is also the author of Journey into Power, Forty days To Personal Revolution and My Daddy is a Pretzel.

A Cat-Cow stretch is an example of a very simple Vinyasa, because the spine is arched on an inhale and rounded on an exhale. A Sun Salutation sequence is an example of a more complex Vinyasa. Each movement in the series is done on an inhalation or an exhalation, When Vinyasa is used as a noun, it describes a series of three poses that are done as part of a Sun Salutation sequence. When the teacher says, “go through the Vinyasa at your own pace,” she means to do three basic poses that are part of the Sun Salutation pose.

Many people ask if Vinyasa yoga is for them. The strength of Vinyasa yoga lies in the fact that there is no single rulebook or sequence that teachers must follow. There is a lot of diversity in the poses and the order in which they flow. There is a lot of room for teachers to practice at their own whim and discretion. Some people might not like the non-classical approach to yoga. Others find it exciting and powerful. Vinyasa yoga has a definite flow to it and is very graceful and powerful to watch. It adds not only a grace, but dexterity to the movements. I found it very stimulating to watch.

Highlights of his CD include 36 poses and fundamental of effective alignment. There is also an in-depth interview with Baron Baptiste.