Dear Spiritual Explorer: I am Jewish and have a mezzuzah on my door, but I would also like something to represent some of my Hindu beliefs. Do you have any suggestions?  Robin R., San Mateo, CA 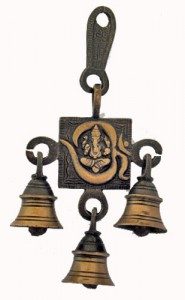 Dear Robin: I don’t know of anything better than our Brass Door Bell with Ganesh Om. Every time somebody comes to your door, Ganesh rings out his greeting and welcomes them. That is the nature of that wonderful deity Ganesh. Full of good humor and abundance, Ganesh not only welcomes people into your home, but also into your heart. Having Ganesh as a door bell reaffirms not only your spiritual beliefs and universal understanding, but that you wish to enfold everybody in your good wishes. I would always want to visit anybody who had a Ganesh on their doorstep and would not be afraid to have my children knocking on that door on Halloween.

Ganesh is one of the deities best known and widely worshipped in the Hindu pantheon. The interesting thing is that Ganesh can be worshipped no matter what one’s religion is. His devotion is widely spread and extends to Jains, Buddhists and beyond India; ergo, America.  His elephant head makes him easy to identify. Most important, Ganesh is widely known as the Remover of Obstacles and Lord of Beginnings. I know that every time one wishes to start a new venture, it is typical and recommended to recite Om Namah Ganesh at least three times. My girlfriend always calls upon Ganesh as she starts her car in the morning, hoping for good travel.

The son of Shiva and Parvati, Ganesh has a huge pot belly. But do not make the mistake of rubbing his belly as one would the “laughing Buddha.” That would not comport with Ganesh’s true nature. One needs to remember that in the Hindu iconology, Ganesh is the lord of success and destroyer of evils and obstacles. He is also worshipped as the god of education, knowledge, wisdom and wealth. And finally, it is said that if you invoke Ganesh and ask him for favors, don’t make the mistake of ignoring him afterwards. He won’t like that.