Dear Spiritual Explorer: I have heard of “dismantling” the ego, and I must admit that while it sounds frightening, I am very excited by the possibility. Could you speak about this? John M., Denver, CO 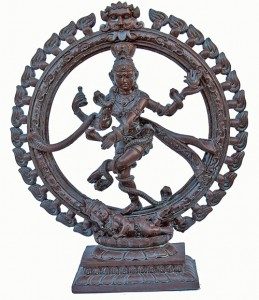 Dear John: The nice thing about “dismantling the ego” is that one does not have to do it alone. When I wish my ego to be “gone,” I personally pray to formidable Shiva Nararaj Statue. It seems so much easier than having to “think” of the way in which to accomplish this. There is of course the authentic saying that one cannot expect the ego to destroy the ego.

Shiva is known as the Destroyer and one of the things he likes to destroy is the ego. While Brahma is the Creator and Vishnu the Preserver, all Shiva needs to do is set his foot down and everything crumbles in his wake.

Many aspiring religionistas make the mistake of thinking of Shiva as a predominant male God, and that he is of course; but the neat thing is that these Hindu gods and goddesses are not really gender specific. You will see in the male gods that there is a decided feminine aspect and vice versa with the female goddesses. The goddesses are fierce and powerful, containing strong masculine as well s feminine feminine aspects. Shiva as well as the other gods and goddesses all appear to be quite androgynous both in action as well as appearance.

This Shiva statute has a trident in one hand to ward off evil and the other hand to bless you. This is so typical of all of these gods and goddesses. Not being disrespectful, I have heard people say that these gods and goddesses both kill us and thrill us. While we are afraid that they are running off with our egos, there is nothing more we want than to surrender our egos to them so that we may feel the joy that is our birthright. This is what is known as dismantling the ego, a process that if one resists can take a very long time, or if one surrenders, becomes an easier path to traverse.
Good luck to dismantling your ego. Pray to your Shiva and he will help and guide you.