By The Spiritual Explorer | Published 15 January, 2014 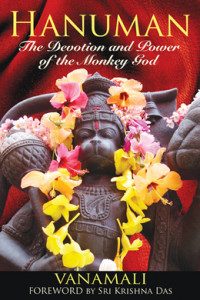 Hanuman: Devotion and Power of the Monkey God

Dear Loren: I can think of no better book than one written by a true Hanuman devotee, Vanamali Mataji: Hanuman: The Devotion and Power of the Monkey God. Vanamali Mataji’s ashram is dedicated to serving children’s charities and sharing the wisdom of the deities. Thus, one would say that she lives the ideals of her beloved Hanuman.

Excerpting from a speech Vanamali Mataji gave at a reception, she said, “One must follow the humble example of Hanuman, who embodies Shakti (power) and bhakti (devotion) Without bhakti, pure Shakti gives rise to arrogance. But coupled with bhakti, it gives direction and purpose to life and aids in spiritual evolution. By combining bhakti and Shakti, you will find a positive expression and purpose, giving you peace of mind.”

Vanamali Mataji is a brilliant expositor of Hanuman. There are thirty-six commentaries and stories about Lord Hanuman in this book, along with yoga practices and Vedic Astrology.

Who is this Monkey God Hanuman who contains within himself such humble attributes and yet is also a brave warrior ready to save the world or his beloved Sita when she is abducted by the demon Ravenna in the Ramayana? Several texts also present Hanuman as an incarnation of Lord Shiva. Hanuman is also the son of Vayu, the Wind God, who according to several stories, played a role in Hanuman’s birth.