Dear Spiritual Explorer: I’d like to purchase the Yin Yang Necklace that you have in your store. Could you tell me something about yin and yang?   Lawrence P., Baltimore, MD 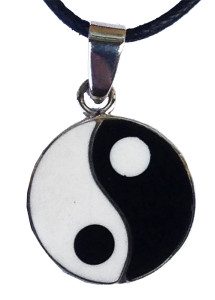 Dear Lawrence: The yin-yang symbol as showed in the Yin Yang Necklace represents the ancient Chinese understanding of how the energies work in the universe. The black and white shapes are yin and yang symbols.

You will notice that the yin and yang symbols are part of the whole of the black and white composite; they are not viewed as separate objects, but appear interconnected and linked together. The interconnectedness of all things forms the basis for Eastern mysticism.

As westerners we tend to demarcate or consider things separately. The Eastern way is to see so-called opposites such as black and white or yin and yang as rising out of each other, where black eventually becomes white and white eventually becomes black. These yin and yang symbols are not oppositional to each other. Famed philosopher Alan Watts, who actually brought Zen Buddhism to the west through his fabulous symposiums on the differences between east and west, would speak of how a tree from an Eastern viewpoint would be seen as growing out of the land and part of the sky and earth. The western view is to see a tree as just a tree, a separate entity from its environment.

In this philosophy humans are part of nature and nature is part of us. Much of the environmental concerns these days arise out of man’s separation from nature and his tendency to view it as something to be used for greed and baser purposes. Humans are not considered as stewards of the Earth, protecting it as they would protect their own skin.

I studied macrobiotics many years ago where foods were classified as yin or yang. For instance, sugar was considered a yin food; something that would contribute to passivity and coolness whereas meat and salt were yang and gave rise to heat and energy in the body. The extremes represented in these foods were thought to bring disease since they were oppositional energies and unbalanced. Foods such as brown rice with veggies were thought to be more balanced and could promote healing.

The underlying philosophy of yin and yang is certainly one that contributes to a harmonious view of life where people are seen as not separate from each other through their differences but interconnected and valuable to each other in their diversity. This is basically a very cursory view of yin and yang, but I hope that it will bring some enlightenment. Spiritual Explorer