Dear Spiritual Explorer: Have you ever heard of the herb sanjivani? Laura P., Washington, DC 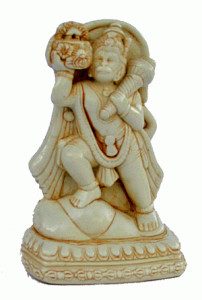 Dear Laura: We have a statue called the Hanuman Sanjivani Statue at Ma’s India and there is a whole history of sanjivani that is interesting.

The Ramayana, an ancient Indian epic, tells of Lord Rama’s attempt to reunite with his kidnapped wife Sita. His brother Lakshman and Hanuman, the monkey god, accompany him on his quest. Unfortunately, along the way, Lakshman was wounded in the war against Ravana. Lakshman was struck with an arrow and became unconscious. In Indian lore, being struck unconscious was considered the same as being dead.

Hanuman is then sent to find sanjivani, a powerful life-restoring herb. It grows on a mountain in the Himalayas. However, Hanuman found it difficult to identify the herb, and not willing to be unsuccessful, Hanuman lifted an entire mountain and brought it to Lakshman. And the Hanuman Sanjivani Statue depicts Hanuman carrying the mountain to Lakshman.

Sanjivani is an actual plant used medicinally in India. While mythology talks of its magical properties, the sanjivani plants have traditionally been used for centuries in India. Sanjivani uses include relief from heat stroke, irregular menstruation and jaundice.

The Hanuman Sanjivani Statue stands 2 l/2 inches tall and is made of faux ivory that can be easily cleaned with warm water and liquid soap.