Dear Spiritual Explorer: Pardon my ignorance, but what is the significance of bone in a mala? Ronald R., Wichita, KS 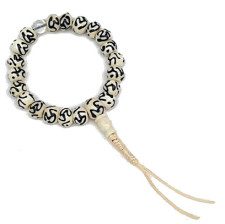 It is said that the more we contemplate our mortality, the richer our life is. We begin to live life differently. When we begin to accept death as inevitable and have full realization of it, other than actually dying ourselves, everything in life that we might have considered important seems to recede in value. Different values predominate: service to others, love for others and ourselves, kindness, empathy, compassion, etc. Wishing to have value in our lives, we begin to devote our lives to awareness of being rather than doing and accomplishment.

Bones in malas originated in Tibet from yaks. When yaks departed from the earth, every bit of the yak was utilized including the bones which were placed into sacred malas. Similar to sustainable farming, everything is used to conserve and serve at the same time.

It is also believed in Tibetan tradition that the yak in service to humanity is considered a sacred animal. Further, that their service is rewarded in the next lifetime by a change in consciousness and awareness. I presume it means taking a human birth, although some might not consider that evolution. However, that’s another discussion.

Enjoy your bone mala; it will last a lifetime.