By The Spiritual Explorer | Published 22 October, 2014

Dear Spiritual Explorer: Can you speak of the darkness of Kali and how it regenerates humanity? Rae P., Dallas, TX 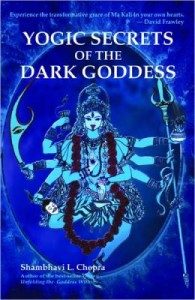 Yogic Secrets of the Dark Goddess

Dear Rae: Yogic Secrets of the Dark Goddess by Shambhavi Chopra can give you the most definitive and expansive explanation of the darkness of Kali. According to Chopra, Kali actually holds the key to the spiritual regeneration of humanity. Unless we reconnect to the deeper feminine energy of the universe, as reflected by Kali, we are unlikely to resolve the conflict that has arisen from ignoring the divine influence and contribution of femininity to the human race.

Kali is the ultimate feminine expression of the mystery of woman, which includes her fertility, mystery, magic, and transformative qualities. It is because we have misunderstood the way in which she is pictured with skulls and what some would term as images of violence, that contributes to the fact that Kali has not been fully spiritually acknowledged. We also see her with her foot upon Shiva, all of which could of course translate to superiority and dominance over the male aspect. This however would be a wrong interpretation of Kali’s stance. In truth her foot upon Shiva represents the fact that both Kali and Shiva devour and conquer each other simultaneously, thus producing true tantra.

You might ask what is true tantra between Shiva and Kali. As Ma Jaya Sati Bhagavati would say, it is when each of them surrenders to the other. It is when male becomes female and female becomes male. This merging of Shiva and Kali becomes the ultimate expression of love and merging.

Much mystery enshrouds this dark form of Kali who in fact holds all the energies of life and death. The greater connections of this Dark Goddess to the forces of nature, particularly electrical energies of life and perception, are seldom noted. Kali’s role to bring us back to our Divine Source is not addressed in any meaningful way to the multitudes. People do not see that Kali’s deepest purpose is to take us beyond all ignorance and sorrow.

However, when one approaches Kali, the Dark Goddess, with reverence and respect, she will reveal her golden illuminated self to us and connect us to our deepest awareness.

How to approach Kali? With our inner heart and inner eye. Chopra provides us with a direct experience of Kali as she is in her inner reality, ignoring all the confusion and distortion about her. Her gentle face is revealed to us shining her inner light upon us. Chopra’s entire book is a means of bringing the energy of Kali into our world and into our psychology, restoring the magic of what is beyond the human mind to vitalize our deeper feelings and perceptions.

This is a wonderful explication and experience of the Goddess Kali for sure. You will so enjoy it.