Dear Spiritual Explorer: Normally dorjes are use for meditation, but I saw some politicians keep dorjes in their hands while they address the public. 4 prongs, 5prongs, 9 prongs: Which one is good to keep for daily use? I am very grateful for your advice. Thank you. U.E.G Dayaratne, Sri Lanka 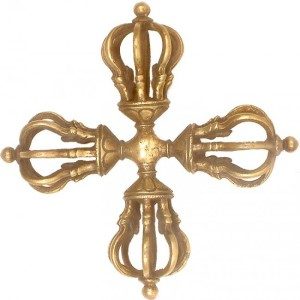 Dear Sir: I appreciate your request, giving me an excuse to delve more into the mystery of the dorje. I am presuming that you are referring to my tiny treatise on the dorje in December of this year, at which time I mentioned what I considered to be the most extraordinary purpose of the dorje–illumination of the mind, the moment where our thoughts become crystallized into one blissful experience of the truth and reality lying beneath illusion.

The vajra or dorje of which you speak is made up of several parts.In the center is a sphere which represents the primordial nature of the universe, the underlying unity of all things. Emerging from the sphere are two eight petalled lotus flowers. One represents the phenomenal world (Samsara); the other represents the noumenal word (Nirvana). Arranged equally around the mouth of the lotus are two, four or eight mythical creatures which are called makaras. Out of these makaras come tongues which come together in a point.These points are to be used to cut through illusion or whatever samskara or habituation you are being challenged with in your lifetime.

It is customary for some people to ring a bell, thus announcing their intention of performing a dorje ceremony and then lifting the dorje as if to cut through the obstacle and then making a slashing gesture through the air. It has been felt as a release of sorts for many people who have performed this ceremony.

You speak of the differences in the number of prongs in a dorje. Some traditions use different prongs for different ceremonies and when asked by your teacher to do so, it is appropriate. However, it is my opinion that the commonly used five-pronged dorje is perfectly acceptable for most purposes, unless one is called upon to perform an esoteric practice.

I particularly enjoyed the fact that you have seen people holding the dorjes unobtrusively in their hands at all sorts of functions. That thought does indeed warm my heart. I know that anybody who does that is calling upon an ancient tradition to assist them in dealing with difficult matters in a very enlightened and conscious way. Bully for them! How much preferable to call upon an ancient symbol or dorje to deal with challenging times than resorting to weapons and artillery of many forms.

In these days we long for assistance in the form of heavenly guidance and that which calls upon consciousness, love, devotion and practice rather than violence and abuse, n’est pas?

To conclude, I would say the amount of prongs is a small matter when compared to the fact that you are attempting to cut through Maya or illusion using this arcane and ancient weapon; it will truly serve you. Congratulations!