By The Spiritual Explorer | Published 6 February, 2015

Dear Spiritual Explorer: I am a worldwide traveler and need an icon I can carry with me to keep myself centered and spiritual. Lawrence P., Manitoba, CANADA 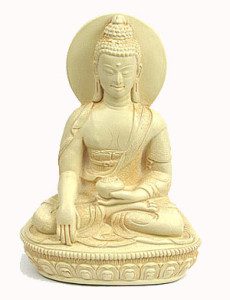 Dear Lawrence: I recommend for you the Shakyamuni Buddha Statue, a favorite of mine. It is small, but carries a big message.

Who was Shakyamuni? Buddhism originates with the teachings of Shakyamuni, which is another name for Gautama Siddhartha Buddha, who was born in Nepal 2500 yeas ago.

Siddhartha or Shakyamuni was born a prince, but was aware and troubled by the problem of human suffering which his parents had diligently attempted to keep from him. Nevertheless, the well-known story is that Buddha escaped from the confines of his well-appointed castle and encountered death, illness and old age, which tore the veil of unreality from him. Eventually Buddha embarked upon a spiritual quest to understand how human suffering could be overcome.

I particularly resonate with the story of how Buddha subjected himself to ascetic disciplines but found it impossible to achieve the freedom he longed for though self-mortification. Story has it that near the city of Gaya, he seated himself under a tree and through his “surrendering the struggle,” attained an awakening or enlightenment to the true nature of all things. Because of this enlightenment he came to be called Buddha or the “Awakened One.”

According to tradition, Buddha then traveled widely throughout the Indian subcontinent sharing his enlightened wisdom, promoting peace and teaching people how to unleash the great potential of their lives. Buddha’s compassionate intention was to enable all people to attain the same awakened state of life that Buddha had attained.

While we are all inspired by the great story of Buddha, I am struck always by the fact that once Siddhartha renounced his asceticism and relaxed in a fashion, he was able to attain the wisdom he aspired to. Similarly, I see in many spiritual aspirants disappointment with themselves that they cannot maintain certain forms of renunciation and similar asceticism that they have decided is the way to achieve enlightenment. Some of them even get lost on a path that is so arduous and without heart that they lose sight of their eventual goals. One might attribute that as just another function of the ego attempting to will something that is not within one’s grasp. However, I feel if one is truly sincere and wishes to achieve a certain amount of peace in their lives, eventually the false parts of one’s aspirations will just naturally drop away as experience deepens. The important thing is that we have come to a certain realization and have set out on our path.

Following the death of the Buddha, his teachings were recorded by his disciples in the form of sutras and spread throughout the world, and I would say Buddhism has thence been generally characterized by an emphasis on peace and compassion.

Enjoy your small big Buddha; it will keep you reminded of your quest. Thank for writing, Spiritual Explorer