I find myself very attracted to Krishna and love hearing songs that recite his name. I particularly like all the stories of his playfulness and his love for his Gopis. Can you tell me more about Krishna? Melanie P. Burlington, IA

Dear Melanie: When you feel a strong feeling of love and attraction towards a particular deity, that is the simplest way of allowing their essence to come into your life. When one is led by the heart, then the heart opens. When the heart opens, the deity enters. When I first became involved in spiritual life, I too was very attracted by Krishna. I loved singing Krishna songs and hearing them. I filled my puja with statues of Krishna, both in ceramic and brass. I even spent my first pay check on a very large brass Krishna statue, which is about a foot and a half tall.  My love for him grew as it were. Then I became involved with a secular love and I did not pay as much attention to my Krishna puja.

When my relationship with my current amour concluded, I became very sad, but then I heard the story of Krishna and the Gopis, particularly that he appeared to all of them in the form to which they were best suited and attracted, and somehow I reconnected with my love for Krishna. I asked him to come to me as my lover also.

Who were the Gopis? They were God-intoxicated beings who saw Krishna everywhere, and they so identified with their love, that they saw themselves also as Krishna. The sound of his flute could throw them into a state of divine ecstasy or Holy Communion. They were above body-consciousness. It was said he taught them: “O Gopis! Have no attachment for anything. Give up the body-idea and sex-idea and attain to the bodiless and sexless Immortal Atman.”

A more modest representation of Krishna is the clay statue of Krishna playing his flute; the clay is from the holy river of the Ganges. Painted in blue, the name Krishna actually means dark blue and refers to the color of his skin. 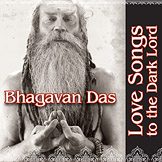 Another reference to the darkness of his skin is Bhagavan Das’ CD Love Songs to the Dark Lord, full of kirtan and chants of Bhagavan Das in his early days after his return from India.

The Gopis or shepherdesses of Brindavan were wonderful devotees of the Lord. They totally surrendered themselves to Krishna. When Lord Krishna played on His flute on a moon-lit night, the Gopis rushed forth immediately to where their Lover,  Krishna, was. They forgot everything when they heard the flute.

Then there is the wonderful story of Radha and Krishna, two absolutely devoted lovers. Radha is the symbol of eternal beauty and the gift of loyalty which she gives to her lover. Radha grew up with Krishna and played, fought with and loved him. He departed to safeguard the virtues of truth and become the Supreme God. She waited for him. He married two other women and she still waited for him. Finally, the two most talked about lovers came together to celebrate their union. Radha’s longing for her lover and constant repetition of his name through her heart is a wonderful legend of true love. See these lovers wrapped in each other’s arms.

As women, many of us have felt that love for someone in human form and can identify with the longing and constant thought of their lover such as the Gopis felt. What is the difference? I think the difference is that unlike secular relationships, the relationship with Krishna never culminates in disappointment or expectations that remain unfulfilled. The feminist call to women might read like this: Women, divert your longing for a human relationship to the Supreme Being Krishna and never suffer disappointment again. Not a bad idea, says this Spiritual Explorer!