Dear Spiritual Explorer: I was excited to read in some Hindu Texts that Shaktism, or the religion of the Goddesses, was equal to the religions devoted to the Gods, Shiva, and Rama and Vishnu, respectively. These Goddesses are depicted as extremely powerful and awesome. What I am curious about is if there is this extreme worship of the feminine Goddess in the Hindu religion, how did women become so subjugated and subordinated? – Marge S., Topeka, KS

Dear Marge: I have often wondered about that myself, how women have somehow been relegated in religious life to a second class status. What about them made men so fearful of their power and knowledge? This is especially puzzling to me since the Hindu religion actually acknowledges the feminine aspects of the Goddess, in their most powerful and ferocious forms. Nowhere in the world is there such a complete female oriented religious system and one where both male and female gods and goddesses are respected in all their forms. And yet the women in India have had the same struggle that women all over the world have to assert their equality in independence. It is certainly difficult to ponder your very valid query without undertaking a prolonged historical and societal view of men and women in general.

However, I will talk some more about Shaktism, that religion devoted to the female Shakti energy. We have all heard of some Amazon tribes, who apparently have even dismissed the male energy as unnecessary, other than to join with them in propagating the species. Shaktism’s focus on the feminine Goddess does not imply a rejection of masculine divinity. If Shiva is united with Shakti, he is able to create; if he is not, he is incapable even of stirring. This is the fundamental tenet of Shaktism emphasized in the image of the Goddess Kali standing on top of the seemingly lifeless body of Shiva.

Because of this last depiction of gods and Goddesses, again I am at a loss to understand why the creators of the Hindu religion were not fearful of expressing the feminine side. More difficult to understand, was that even though Shakti is worshipped, this adoration of Goddesses did not always trickle down to how women were treated in India as a whole. However, I have discovered that women in India are making fast track to overcoming these restrictive molds. For instance, did you know that there are more female scientists, physicians, surgeons, teachers, and engineers in India than in the United States? However, just as in this country, women are still relegated to a secondary status as far as employment opportunities and salaries are concerned. 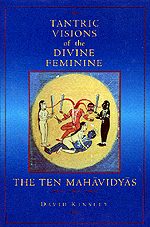 Tantric Visions of the Divine Feminine by David Kingsley

In attempting to re-inspire myself as a woman in this endless struggle for equality, I need only look upon the power manifested by the Mahavidyas, another inspiring example of Goddesses feminism originating from Hinduism. They are ten, very powerful fearsome Goddesses who run the gamut from ferociously horrific to extraordinarily beautiful. We begin with Kali, acknowledged by most to be the Supreme Goddess, whose red tongue routs out evil in the world and we end with the Goddess Kamala, also known as Lakshmi, pictured on a lotus, signifying the beauty that can emerge from the material world. Bhairavi, a scary Goddess inhabits the cremation ground and Bagala paralyzes her enemies. They are both seen as Goddesses alongside Sodashi, the representation of radiant Goddess beauty in the three worlds. A wonderful book depicting these Goddesses is Tantric Visions of the Divine Feminine by David Kinsley where he speaks of the Mahavidyas functioning as “awakeners,” symbols of the female desire to not be confined to male dominated conventional roles

Their name means Great Wisdom, and women are at their best when they are expressing their innate wisdom borne out of the earth, their experience as women and mothers and their bodies. They are also warriors and conquerors. But their warrior and conquering status has more to do with routing out evil in the world and conquering the ego.

Your question, Marge, is one that has confounded many and some people have equaled the subjugation and subordination of women to the same disrespect that has been shown to Mother Earth and all of her expressions. We hope someday that people will wake up to the gift that Mother has for all of us who love her. Thank you for writing.